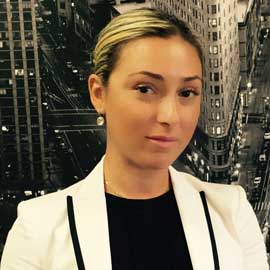 Hellen Tochilovsky graduated from Pace University in New York with a Bachelors Degree in Political Science and a double minor in Psychology and Pre-Law in 2008. She then received a Juris Doctorate degree from Touro College Jacob D. Fuchsberg Law Center in 2013. She is currently admitted to practice in the state courts of New York and New Jersey. She began working for Leon Kucherovsky, Esq. in 2001. At a young age she began from basic filing to becoming a law clerk and managing the billing department until she began law school. Her position as an attorney in the Law Office of Leon Kucherovsky, she handles a variety of cases including No-Fault Litigation, Personal Injury, declaratory judgments, and Health Care issues.